Mother Mary MacKillop was interested in sending her Sisters to Werribee after appointing communities in the suburbs of Newport and Footscray for she knew it be an outpost of the poor in Melbourne’s western suburbs.

In 1906 Werribee Parish formerly separated from the Parish of Williamstown and Fr. Michael Heaney was appointed the first Parish Priest of St. Andrew’s Werribee.

In 1909 Fr. Heaney invited the Sisters of St. Joseph of the Sacred Heart to take on the running of St Andrew’s School following the resignation of Mr Reardon as lay headmaster.

The first Sisters came from Yarraville to take charge of the school. They taught in the old blue stone church / school and lived in a weatherboard house at 14 Mortimer Street.

Sr Ligouri was the first superior. Her companions were Srs Raphael and Giovanni. Sr Giovanni became ill soon after her appointment and was replaced by Sr. Leon.

The Sisters remained in charge of the administration of St Andrew’s school until 2004 with the last Sister retiring from her position on staff  in 2006.

Between 1906 – 2006 over 140 Sisters of St. Joseph of the Sacred Heart worked within St. Andrew’s School and parish community – ‘in a spirit of dedication to the service of others for a cause greater than themselves.’ 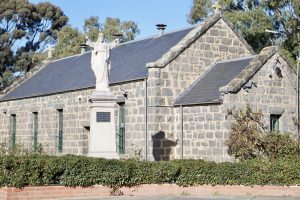